SOME HIGHLIGHTED EVENTS FROM THIS YEARS BROCHURE –

Think you might be – or know – the next U2 or Ed Sheeran?! We are looking for talented musicians to take part in Mallow Arts Festival’s Busking Competition, which will take place again on Sat 27th July @ 12pm. Fill out the jot form below to enter. We accept both groups and solo artists. Show us what you’re made of! 🎶🎶

Mallow Arts Festival in association with Blackwater Photographic Society are running a photography competition as part of this years festival.
The framed winning images will be displayed during the festival at Herlihys Centra on Mallows Main Street.
There will be 3 categories: 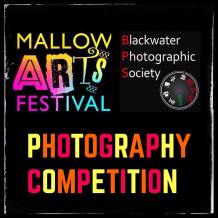 🔻Adult
🔻Secondary school pupils
🔻National school pupils
The theme is open so anything goes.
Maximum of 3 entries per person.
Email your images along with your name / phone number and which category you are entering to blackwaterartsfestival@gmail.com before July 20th.

* Members of camera clubs not allowed to enter.
GET SNAPPING AND BEST OF LUCK!! 📸

MALLOW OF THE NOW PROJECT

The idea is to represent Mallow as it is in 2019. All forms of work will be accepted/exhibited … painting, drawing, photograph, collage …

The Irish Wheelchair Association are holding an Open Day in the Gilbert Centre, Fair Street, Mallow on Wednesday 24th July from 12-3pm.

Display of crafts and screening of IWA drama group’s play ‘A Pot of Spuds’. Visitors can also try their hand at crochet, sketching and clay-work.

ONE MORE CUP OF COFFEE 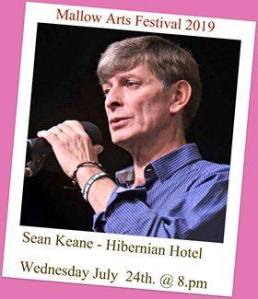 Seán Keane considered by many to be the most distinctive voice in Ireland will perform with his backing band in Mallow for the first time on Wednesday July 24th, the opening night of Mallow Arts Festival

The concert which will be held in the Hibernian Hotel & Leisure Centre is likely to sell out and concertgoers are advised to get their tickets early.

Tickets priced at €25 are available from the Hibernian Hotel and also on Eventbrite.ie at: https://www.eventbrite.ie/e/sean-keane-live-at-mallow-arts-festival-tickets-61095871396?aff=ebdssbeac

THE GRAVES AT KILMORNA 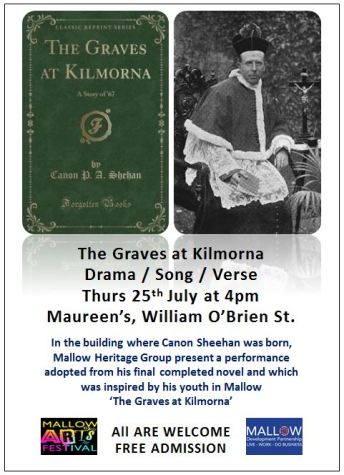 The Mallow Heritage Group of Mallow Development Partnership are delighted to announce their participation in this years Festival through a performance of drama, song and verse.
The Graves at Kilmorna was the final completed novel by Mallow’s renowned author Canon Sheehan and was inspired by his youth spent here. It is based in part around the Fenian Rising of 1867 and depicts a Mallow of Fenian marching and drilling in nearby woods, as well as the funeral of Fenian leader Peter O’Neill- Crowley.
The performance takes place at 4pm on Thurs 25th in Maureen’s Pub which is the very place Canon Sheehan was born!
All are welcome for a bit of drama, song and verse and of course obligatory good fun and craic. Admission is free.

A SELECTION OF OUTSTANDING SHORT FILMS

Always hugely popular so for advance bookings reserve your ticket through Eventbrite at: https://www.eventbrite.ie/e/a-selection-of-outstanding-short-films-tickets-65038830894?aff=ebdssbdestsearch 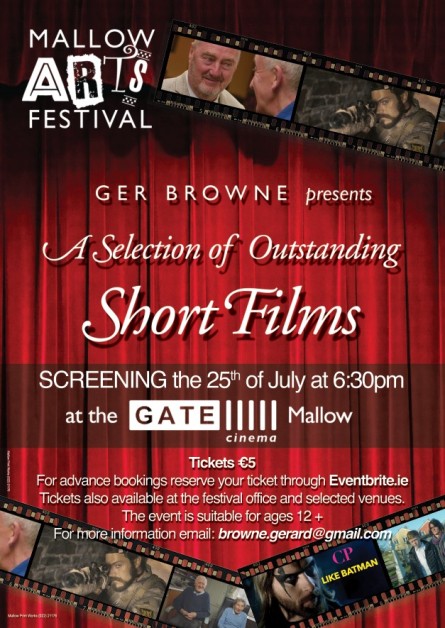 MALLOW OF THE NOW EXHIBITION 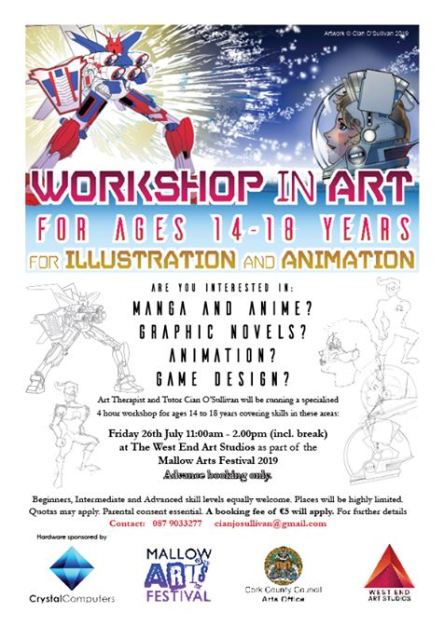 Art Therapist and Tutor Cian O’Sullivan will be running a specialised 4 hour workshop for ages 14 to 18 years covering skills in these areas:

Running for two nights, on Friday the 26th July and Saturday 27th July at 8pm 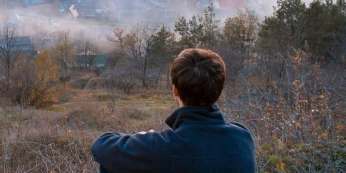 ‘For Forever’ is the story of Jennifer, Cara and Lauren; three friends bound together by their shared history and driven apart by a tragic event in the past. Set on one day in their Transition year of school, we see that each of the young women is struggling with her own challenges. These challenges, along with the tensions that rise due to Jennifer’s grief over the death of her sister, force them to face the changing nature of friendship, and the pressure that mental illness can put on a person. In the build up to a house party, we see how the girls deal with pain through humour, and how friendship can see past a difficult time in a person’s life. In particular, this story illustrates how support and kindness are two of the most important things that a person with mental illness can receive.

Tickets available in advance at Eventbrite.ie

Pretty Happy are a scintillating three-piece act from Cork that are making people sit up and take notice with dynamic live performances and electric eccentricities. The trio have established themselves as a fusion of hard-hitting punk brattiness with exciting, groove-inducing melodies that stun and stimulate in equal parts.

The Sl*t Club are three electrically liberated youngsters from Cork with a passion for melting brains and hearts. The outfit has been working together for the past year to take on psychedelic punky, with vigour and pride. 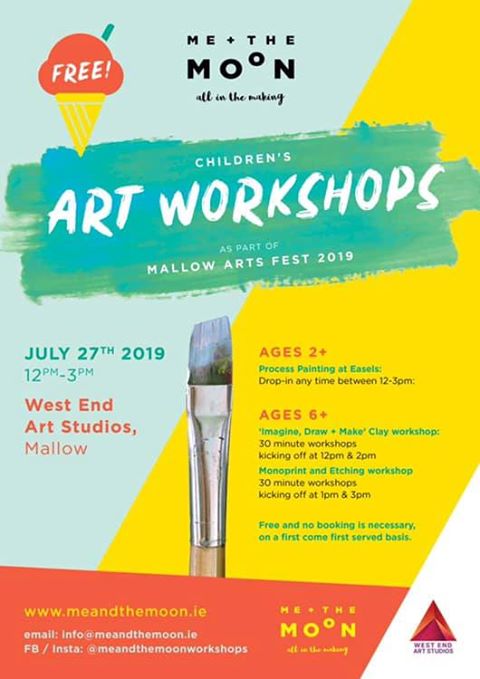 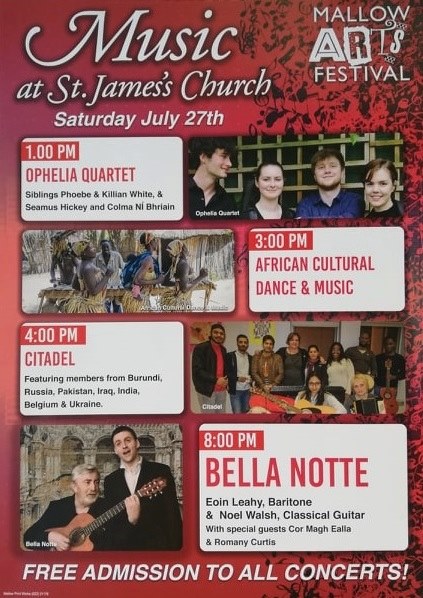 🔥BACK BY POPULAR DEMAND🔥

Join Eoin Leahy Baritone and Noel Walsh on Classical Guitar for Bella Notte, a night of songs from the musicals and more in St.James Church, Saturday 27th July at 8PM.

AFTERNOON TEA WITH GADGET AND CLOUD

Gadget and the Cloud is Kelly Doherty, an experimental electronic artist, hailing from Cork, Ireland. Combining simple ambient vibes with subdued, atmospheric beats, she makes songs to sadly dance to. 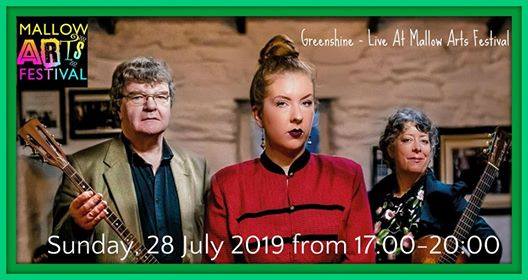 Greenshine play the lovely Garden Room in the Hibernian Hotel for the third time in a year having packed the venue on the two previous occasions.

With their latest album “Family” riding high in the charts, the folk trio return to Mallow Arts Festival by popular demand.

GADGET AND CLOUD + THE QUIET CLUB

Gadget and the Cloud is Kelly Doherty, an experimental electronic artist, hailing from Cork, Ireland. Combining simple ambient vibes with subdued, atmospheric beats, she makes songs to sadly dance to.

The Quiet Club is Mick O’Shea and Danny McCarthy. Formed in 2006, the ensemble has met with considerable success and has become recognised as one of Ireland’s leading sound art improvisation groups.